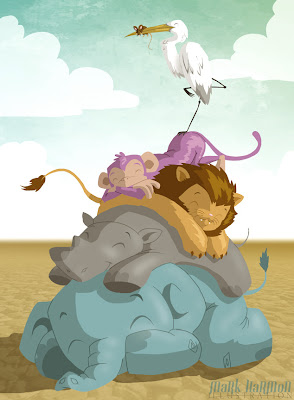 Illustration Friday topic this week is "Asleep". Here are some cute little animals that are asleep. Yeah, not that creative, but hey, they're cute, right? Cute always makes up for lack of creativity. Enjoy.
Posted by Mark Harmon at 3:05 PM 7 comments: 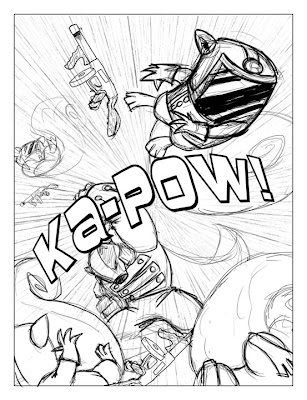 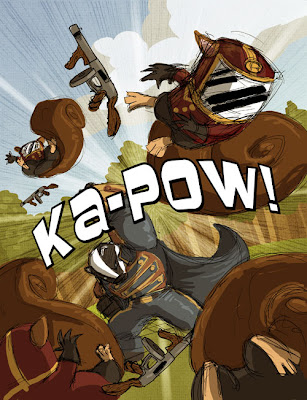 Here is a little sneak peek with some rough sketch and rough color pages of "The Incredible Flying Jellybean" for your viewing enjoyment. This is a shot of the General laying waste to the squirrel henchmen. The funny thing is that I'm nowhere near this point in the story with my writing, but I just felt like drawing it, so here it is. Even though I'm not to this point yet, this will come eventually. They don't film movies in order, so why should I draw my graphic novel in order? Enjoy.
Posted by Mark Harmon at 10:02 AM 2 comments: 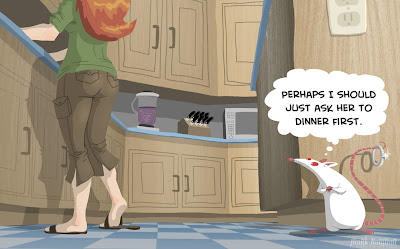 click image for larger view
The topic this week over at Illustration Friday is "Safari". I work on Mac, so now whenever I hear the work 'Safari' it makes me think of the web browser. So, here is a little gag for all of you Mac owners. Enjoy.
Posted by Mark Harmon at 10:08 AM 2 comments:

Hey guys, we got ANOTHER review of our Steampunk Anthology! This time it comes from John Lees. I'll give some juicy tidbits here on the blog, but you can read the FULL REVIEW too.
He was a lot kinder to us in this review than the previous one. But, being kind all the time is not the best way to grow, right? So, it's good to get put through the ringer now and then.
Here's what he had to say about Pest Control:
". . .Pest Control by Mark Harmon is a delight, possibly my favourite story of the anthology. It too seems targeted at an all ages audience – Harmon’s biography tells us that this is his first comic after building up a body of work doing children’s books – but it shows the kind of wit, charm and energy that can excite children while keeping the grown-ups interested too. The story follows a pair of monster hunters going about their daily work, and is based mostly around a montage of increasingly absurd single-page battles. Simple enough, then, as far as the writing goes, but the joy really comes from Harmon’s art. You can tell he had a great time designing the various monsters that our intrepid heroes Conrad and Trigger do battle against. The stylised art is wonderfully expressive, and has a great flow and sense of energy about it. And the story is crammed with visual gags: the bank-robbing werebeaver makes me chuckle every time I look at it. The story wonderfully demonstrates the kind of boundless, unfiltered imagination comics can offer an ideal outlet for. Pest Control is a fun romp, and if Harmon is this adept with the tools at his disposal in his first comic, he’s only going to get better as he gains experience in the field."
Well, that's it for now. Looks like I'm on the right track. Let's hope that I can pull off The Incredible Flying Jellybean just as good as I did Pest Control. Enjoy.
Posted by Mark Harmon at 7:08 AM No comments:

Hey everyone, just wanted to draw your attention to the first review of
8: A Steampunk Anthology
The review is from Doctor Q, the media editor for Steampunk Chronicle. While I will admit that he didn't exactly give all of us a glowing review for our stories, he did however commend us on our efforts and what we're trying to accomplish as a group. 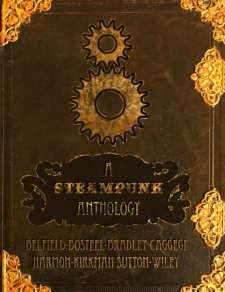 ". . . I applaud illopond’s efforts immensely in this project. In a world largely dominated by large publishing companies, . . . the concept of this collective as a way for artists to put out short stories together as a theme, but yet still remain true to their own works is brilliant . . ." 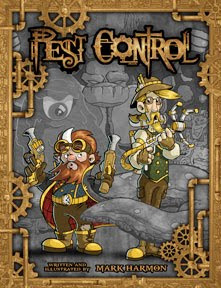 But, of course my favorite part of his review was of my baby, Pest Control:
". . .“Pest Control” by Mark Harmon was amazing. So simple a premise, but spot on for theme, execution, and amusement. Easily tied with my favorite of the anthology, and to think this eight page story was Mark’s first comic. I could easily see this premise and story as an ongoing webcomic at the very least, if not a feature graphic novel in its own right. Simply put, it was fun and I’d love to read more of it. It had Octocrabs, a Were-beaver, and more gadgets packed into eight pages than you can name, what’s not to love?"
So there you have it, our first review. Like I said before, he didn't give us all glowing reviews, but I'm pretty dang proud of my comic "brothers-in-arms". I think we did fantastic for our second collaboration and publication. So, what are you waiting for, click on the title above and get yourself a copy. Enjoy.
Posted by Mark Harmon at 7:51 AM No comments: 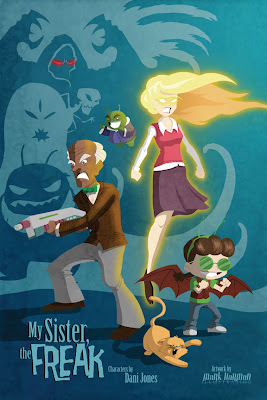 Hey blog readers, wanted to do some more fanart for Dani Jones' webcomic called My Sister, the Freak. I've already done some fanart for this comic before that you can find HERE.
I've been in the process of changing up my style to a more "cartoon modern" style, which for me, pretty much just means dropping my black linework and adding more texture to give it a more vintage feel to it.
That's also what I was going for in this piece a little bit. I wanted it to look like an old school movie poster. Hope it worked.
That's it. Enjoy.
Posted by Mark Harmon at 10:13 AM 3 comments: