Okay, so I've heard of artists doing "link exchanges" which is, you put my link on your site and I'll put your link on my site, which is good I guess, but is a little strange, especially if I don't know the person. So, on the side I've put a Link Exchange section on the right side of the blog.

So, here is my disclaimer: I neither like, nor dislike the links I put in there. The individuals I've put in there have asked me to do it, so I did. So, I'm open to doing it, but I will not endorse you in any way (unless I find your work to be awesome), I'll just put your link in that section.

I hope I don't sound like a jerk with this. Just keep in mind that this is MY site and I am trying to keep a sort of theme and aesthetic and if your site doesn't fit in with what I'm trying to do, then it's just going to go in that section with no further mention of it. Hope everyone understands. Thanks.
Posted by Mark Harmon at 12:31 PM 1 comment: 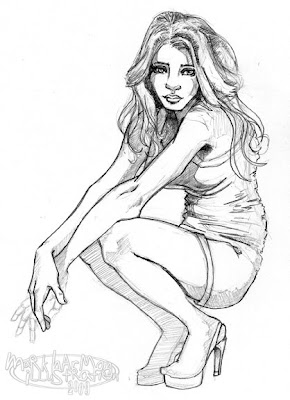 My wife says that I don't draw enough girls and that when I do, they are warriors or tough girls. So, here is a little practice drawing a "pretty" girl.
Posted by Mark Harmon at 10:58 AM 3 comments:

My "Street Cred", as they say. 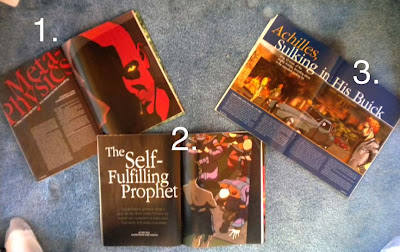 Here are the covers of Realms of Fantasy magazine that my work is in. Below are my illustrations inside. Boy, that one in #2 sure is bad. Anyways, enjoy.
Posted by Mark Harmon at 10:33 AM No comments: 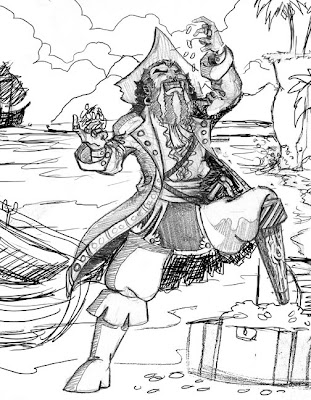 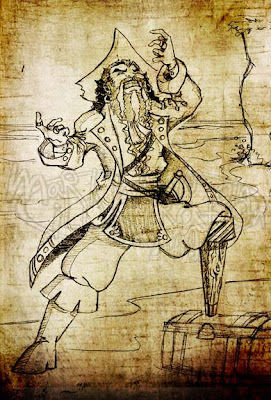 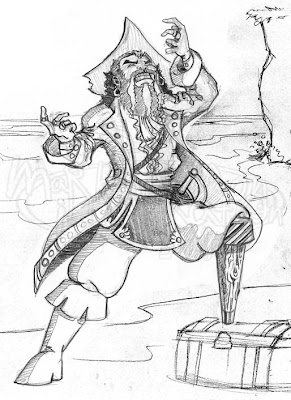 YARR Matey! Here be a pirate me drew today. Ye best be scared mate of this here scurvy dog because he be making you walk da plank.

All right, no more pirate talk (mostly because I'm no good at it). This is a sketch for my book. I just threw it in Photoshop real quick and put a old paper texture on it. Finally the top one is the final version, unless I change it of course. Enjoy, whoever is reading this.
Posted by Mark Harmon at 6:21 PM 1 comment: 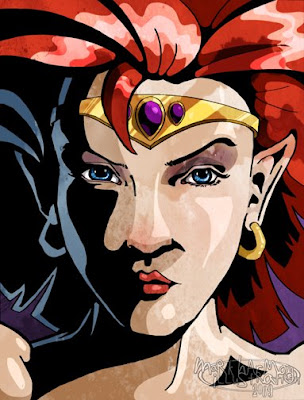 This isn't for anything special. Just a fairy girl's face. I just got the demo of iShowU for my Mac. This was the image I was drawing to test out the program. After I was done dinking with it I decided to finish the piece. Not the coolest thing I've ever drawn, but, whatever. Enjoy.
Posted by Mark Harmon at 9:39 AM 1 comment: 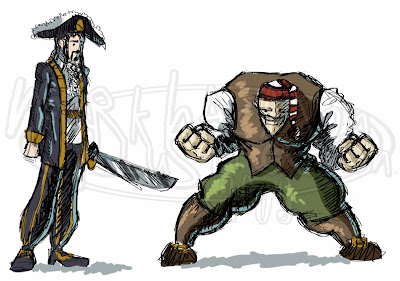 I know that I said that I wouldn't show any more, and I won't show finished pieces, but I just wanted to share some sketches for the page I'm going to be working on today. Can't go wrong with pirates.
Posted by Mark Harmon at 7:50 AM No comments: 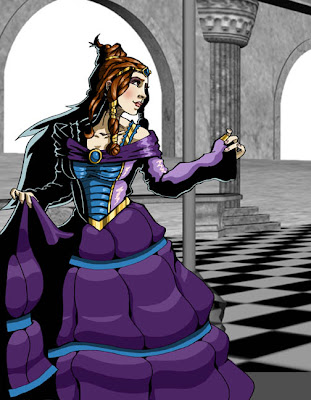 Here is the revision for the Pickle Lady, I mean, princess. That is just an idea of a background. I don't know if I'm going to follow it exactly. Hope this is better.
Posted by Mark Harmon at 8:44 AM No comments:

I've been listening to an AWESOME podcast lately. It's called Art & Story with Jerzey Drozd and Mark Rudolph. They dig deep into the philosophy of comics and freelancing. They are a blast to listen to and give out a lot of great information. They've made me think more about what I'm doing and why I do it. I highly recommend taking a listen. Just click on theArt & Story link to the right there. I emailed these guys a question on a Friday and they addressed it the next Wednesday on their show. How cool is that? If you want to listen to the podcast with my question on it you can look up the episode called "The Big Anthology." Mark and Jerzey are awesome. That's all I got to say about that. Enjoy.
Posted by Mark Harmon at 8:33 PM 3 comments:

More of my book 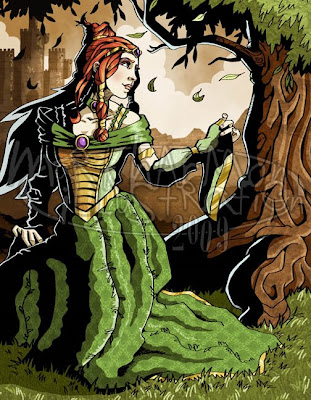 Here is another page from my book. I think this will be the last one that I post, just so I'm not putting the whole thing on here. I plan on being done with this by the end of July so I can have it printed and ready to be sold. I plan on selling this thing at a "farmers market" thing in Salt Lake City, UT. I saw a segment about it on the news and it seems like a great place to sell some art. I also plan on selling it at various Art & Craft fairs in Utah. I'm in Wyoming now, but there is nothing going on here, so that's why I'm doing it all in Utah. I've been trying to get a table at Fandemonium in Nampa, ID, but the lady in charge has not gotten back to me. Anyways, enjoy.

So, I just had my wife take a look at this for the first time and she said that this princess girl looks like a snake lady in a pickle costume. The sad thing is she's totally right. I've been working on this picture too long and haven't been able to look at it from the outside. I've become so invested in it that I've been blinded. It's really good to have a wife that doesn't blow smoke up my rear end and gives it to me straight. She's my best critic. My mom looks at it and says, "Oh, she's so pretty." Which is flattering of course, but doesn't help much. Anyways, I'll keep this image up, but expect it to look really different in the final version. But, I guess people really like to see the process that goes behind this stuff, right? Anyways, later for now.
Posted by Mark Harmon at 12:30 PM 2 comments: